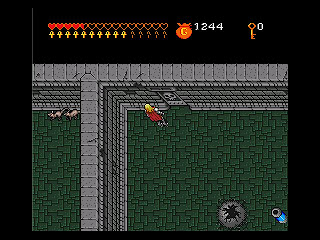 I'm back! I've played a few more hours of SNES Ultima VII the past couple of days. Among other things, I tracked down and destroyed the sphere and I'm currently--literally, right at this very moment--in a dungeon beneath Serpent's Hold where I am waiting for my magic points to regenerate enough to cast several Unlock Magic spells. This version of the game only has a few of the tunes from the original game, so I am listening to an endless loop of the music I associate with the taverns. The MIDI you can download has a particular name, but it's not coming to mind. I was sad that the F ellowship music doesn't seem to be present, which was always my favorite from Ultima VII. I even taught myself to play part of it on the piano, an amusing experience since I had not otherwise played piano :-P

I am getting off topic. Most of the past few gaming sessions have been spent in dungeons. It seems I never give up hope that I'll find something cool in them! I am specifically targeting the dungeons for which maps don't exist. However, I am beginning to understand why maps don't exist...For example, in the Britannian Sewers, I worked my way to the third level or so and all I get is a door with a brick wall behind it. In fact, the Guardian's head pops up and for some reason expresses his disappointment (see screenshot). I would have enjoyed hearing the Guardian voice from Ultima VII say that, actually. There's also some kind of system of caves by which multiple dungeons are connected, but I 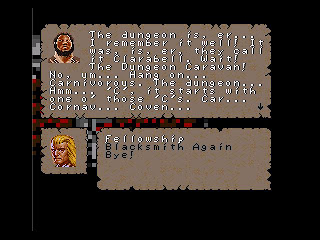 have such low confidence that the dungeons will be worthy of exploration that I'm loathe to figure it out.


I just took a break to play the game and discovered that instead of finding my way to the cube generator, I seem to have found my way to the Fellowship Meditation Retreat--And what an un-relaxing retreat it is, full of mongbats and giant spiders firing yellow spheres and green blobs, respectively. This seems to mean I need to delve back into the dungeon. Argh! I should probably create a map this time around... 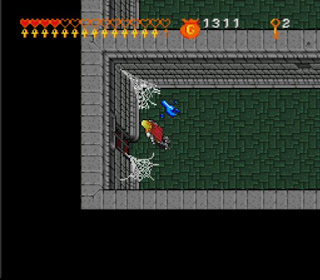 I have attached some screenshots. These include the stupid brick wall (maybe I should have used a powder keg on it?), the destroyed sphere generator and a conversation with Zorn. Why Zorn? Well, I talked to him recently and it's probably worth seeing how the conversation system has changed. I feel like, but am not certain, that a bunch of the graphics were taken from the SNES Ultima VI. Especially the potted plants and cauldrons, which look suspiciously familiar! I'll need to include those next time.
Posted by CageBlogger at 6:26 PM

I can't believe you're playing this one. I returned it the day I bought it to the gaming store. I think trying to finish it would have made my brain hemorrhage.

On that note, though, you should pick up a copy of the SNES version of Ultima VI as well. I own this one, and it's surprisingly close to the original. MUCH more playable than SNES Ultima VII.

You feel like tackling the NES version of Ultima V next?? That one looks like a real turd in disguise.

What's up? You finish this one? Don't leave us hanging!!

I remember this Ultima. Very boring compared to the computer version. They ripped out half the game.

I was wondering if you could help me with Exodus on Winapple. For some reason, I just can't get it to work. I'm not sure how to get the Player Disk to interact with the actual game or to mount them at the same time, if that's what's supposed to be done. If you could help, thanks in advance. Hope you continue this. You should check out Runes Of Virtue II on the SNES. It's a very "interesting" update on the gameboy version.

Phid, I am impressed, deeply.
I had not visited this blog for over a year, figuring that its candle might have gone out with a whisper, but no, there have been news!
Astounding!

So that means you have three more games to play: the two SNES versions and Lazarus :D

I actually bought Dungeon Siege in order to play Lazarus, but then all hell broke loose and I have not touched it in over a year.

I started blogging on Wing Commander a year or two ago, but trying to wrap a nice story around especially WC1 is difficult. What with the "I got 10 kills and my wingman got none, well almost got me, thanks Maniac" ...
Still, I am quite interested in seeing you continuing blogging.
Oh, and where are the pictures of the crossbow for RG's sake????

Fake Ultima VII is still better than Runes of Virtue 2. Sherry the mouse is as big as Lord British. She looks like a person in a fursuit.

Also, the FM Towns version of Ultima VI (the famed 'talking Ultima VI') is pretty bad. You may have to navigate a Japanese menu or two, but it's pretty obvious, and once you're in game, you can select English or Japanese. Don't ask me why they included English voice acting in a game that would never see release in an English speaking country. You need it and an emulator (UNZ) and a copy of XP to get it working.

A little bird told me might be a place to get it.

I'm always happy to see Ultima blogs. I write about it too, but I never update, I often delete posts and the ones that stay up are really more just...boring random notes. You've done a great job, a very fun read.

I too, sat through this game, and I'm glad to know I'm not the only one who has. The way the plot is handled is kind of like a B-Movie in some regards- so bad, it's funny. Plus, everyone being "kidnapped" sounds like a lame Fellowship excuse anyway!

Batlin: Oh yes. *ahem* That Finster. He...uh. He was kidnapped. Alert the guards. Or something.

Guards: *promptly stop caring and wait for the Avatar to do the rescue, as usual*

It took me forever to figure out how to unlock those doors with the stone cow heads (?) above them.

I think you may be correct on your hunch that some of the graphics are from VI.

I'm actually playing the SNES version of ROV2 myself. I'm on the Abyss, so I'm almost done. I found it kind of pleasant... Not a masterpiece- pretty dumb, but mostly inoffensive. I have not played the GB version, though. I think some of the graphics here are also from Ultima VI, but I haven't played that in ages.

This game almost made my head ache! But, it has occupied me whole day.

Thanks for sharing the Knowledge!
I was looking for above mentioned Information.

Baitlin:I am just now hearing of the kidnappings, Avatar. Great game. BTW powder keg won't work on the brick wall . You should've listened. I have a bag full of keys do you sell them? or did i forget to waterwalk that cave maybe?